Futuro Digitale is a Partner of

The sixth edition European programming week will be held from 7 to 22 October 2017. During Code Week, thousands of events will take place in all parts of Europe to offer young people the opportunity to start programming! They will not just be workshops, but real programming experiences that will allow guys of different ages to enjoy constructively the appearance of their ideas. The materials and methods that appear during Code Week will remain available to anyone who wants to use and expand them.

Code Week contains events proposed by anyone who shares its purpose and can help to reach them. The success of the initiative is measured by counting people, especially young ones, who during the programming week will have the opportunity to attend an event based on computer theory. That’s why it is important that there are a lot of events and different from each other, distributed throughout the national territory and, above all, participating! To achieve this goal, the collaboration and participation of all is needed!

Programming is the language of things. The objects we call smart contain a microprocessor that only needs to be programmed. Programming is the easiest way to accomplish our ideas. In addition, computational thinking stimulates creativity and helps us address and solve problems of any kind.

Italy participates as a protagonist in the European Code Week. After  Italy’s extraordinary participation in the 2016 edition, Italy was entrusted with the general coordination of the European initiative. We will organize events at local and national level, coordinate international events and launch important institutional initiatives for schools and students .
The interactive map of scheduled events is available online and is continually being enriched. Many of the events will be provided live and online streaming to allow the participation of schools and groups of kids associated with other venues.

Events Organized and promoted by Digital Future this year:

“A Brick for the Digital Literacy” 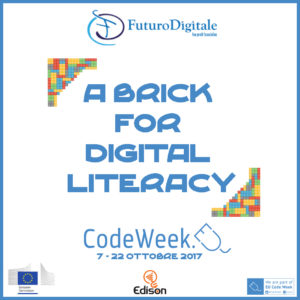 The event will take place at:

Events will take place at:

Kids can interact with tools that allow more “professional” use and are aware of today’s massively-used technologies, and also promote prevention activities for violent phenomena that are closely related to the use of computer tools such as cyberbullying.